“He who comes to my mosque here [in Madinah] to learn or to teach some good thing, he is in the status of the mujahid in the cause of Allah”

Two decades ago, my father had dragged me to the Mosque of the Prophet when I was — let’s say — less interested in Islamic knowledge. He had agreed to meet a colleague at a particular class that was being held in the Masjid of the Prophet.The scholar took just one verse of the Qur’an, and spent the hour making the class to memorize the Ayah and explaining its meaning. I still remember the verse:

Indeed, Allah does not forgive association with Him, but He forgives what is less than that for whom He wills. And he who associates others with Allah has certainly fabricated a tremendous sin.

His explanation of the verse was eloquent while being easy to understand, he was gentle in the way he presented the message, but firm in driving home to the listeners the implications of this verse.

I remember asking my father who gave the lesson; and he told me it was a scholar by the name of Abu Bakr Al-Jazaa’iry; the author of many well known books including Minhaj al Muslim, and Al Tafseer al Muyassar.

What many people don’t realize is that when visiting Madinah, there are many opportunities for different forms of worship, and one — that the above hadith refers to — is to learn in the same way that the Prophet (SAWS) taught his Sahabah: they would sit down and listen to him.

In the remainder of the article, we give some tips for how to find out what’s going on and how the classes are organized. Unfortunately, most of the lectures are in English (although there were a few lectures also in Urdu and Indonesian).

Pick up the timetable

Near door 18 is the office for classes (if you need to ask someone for it, you can ask for shu’un al tadrees — the committee for education). They have a little two sided sheet with a list of all the classes, who is giving the classes and where the classes are located.

But where is door 18? Here’s what the mosque looks like in Google Maps (link): 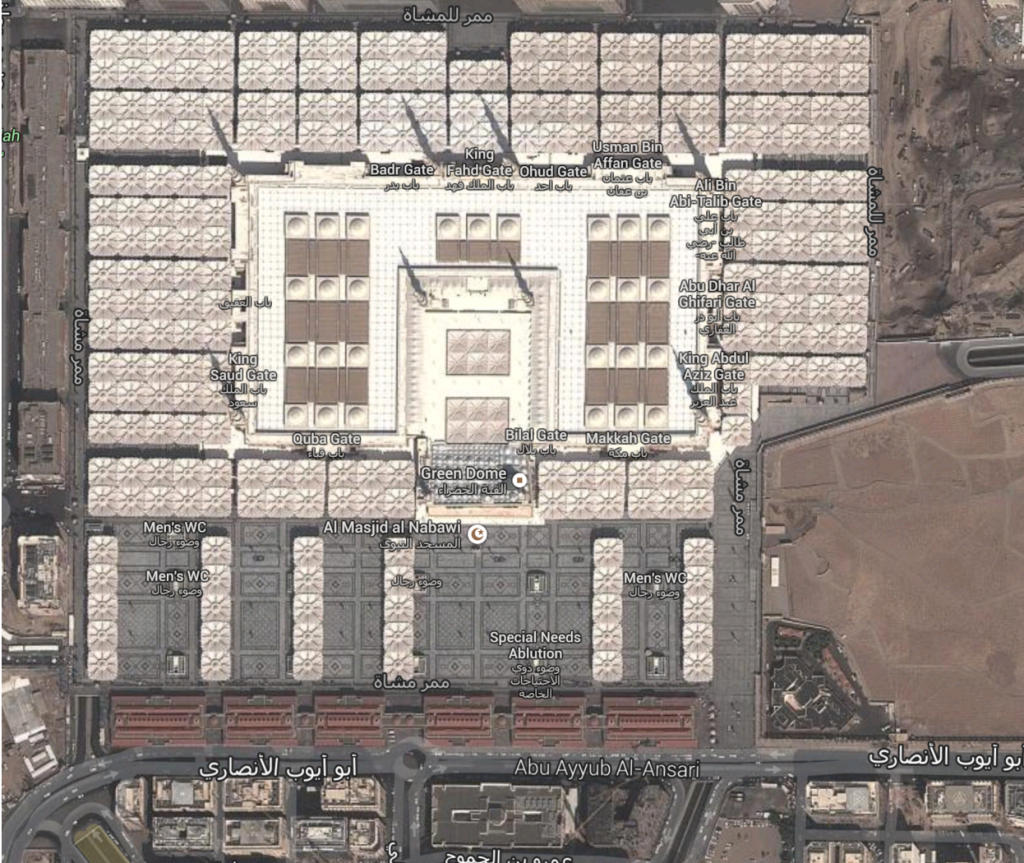 Confusingly, the “front” of the masjid faces south, so the green dome is at the southernmost point. At the northern end of the masjid, you can see the King Fahad Gate, right in the middle. It is the biggest gate to the Haram, and pretty hard to miss. Officially, King Fahad Gate is door number 21, and the doors are numbered clockwise, so simply enter through the main gate, turn right and count three doors, and there should be signs to the office.

Note that the timetable is updated every month; so it’s important to get it fresh!

For each row, it shows you the speaker, the topic, the time and days of the classes (e.g. after fajr, after maghrib, all days except Fridays, etc). As you can see, at any given time, there can be as many as 6 classes running on different subjects!

Unfortunately, I did not get the opportunity to explore the classes that are available to the sisters — separate classes are held for men and women. Maps that I tracked down online afterwards seem to suggest that a similar timetable of classes for women can be picked up at door 28.

Now that you’ve found a class that you like from the timetable, it’s time to try to find out where in the masjid it is — and this can be quite challenging at times; but feel free to ask the supervisors at the doors for where they are, pointing to the description on the sheet. It’s a good opportunity to practise your conversational Arabic, and also, in my experience, the supervisors at the doors are very helpful.

There are different types of classes; depending on the personality and preference of the scholar. Some of the classes are of the form of someone reading from a book (e.g. Ibn Katheer) and the Sheikh stopping the reader every so often and providing their own commentary. Others are a short talk followed by a prolonged question and answer session. Others are presentations on various topics: the meaning of a particular verse or hadith. One seminar I went to simply was a revision from first principles of the correct way to pray.

It’s important that one show patience when attending classes. I’ll admit that some of the classes I found a little boring — typically the ones where a student reads a text, and then every so often the sheikh stops him or corrects him. But others have been turning points — like the one I mentioned above.

There’s a special joy to learning Islam in the same place and — to a surprising extent — the same way that the sahabah and early generations did. When staying in Madinah, it is worth considering gaining knowledge as one of those beloved acts of worship.